Nanny of the Maroons

Queen Nanny of the Windward Maroons has largely been ignored by historians who have restricted their focus to male figures in Maroon history. However, amongst the Maroons themselves, she is held in the highest esteem. Biographical information on Queen Nanny is somewhat vague, with her being mentioned only four times in written historical texts and usually in somewhat derogatory terms. However, she is held up as the most important figure in Maroon history. She was the spiritual, cultural, and military leader of the Windward Maroons and her importance stems from the fact that she guided the Maroons through the most intense period of their resistance against the British, between 1725 and 1740.

Queen Nanny is presumed to have been born around the 1680s on Africa’s Gold Coast (now known as Ghana). She was reported to belong to either the Ashanti or Akan tribe and came to Jamaica as a free woman. It is possible that Queen Nanny brought slaves of her own, reportedly being of royal African blood. It was not uncommon for African dignitaries to keep slaves. She was said to be married to a man named Adou but had no children. She died in the 1730s.

Moore Town is now the primary town of the Windward Maroons – it was founded in 1734 after the British destroyed the original Maroon town, which was known as ‘Nanny Town’.

Slaves imported to Jamaica from Africa came from the Gold Coast, the Congo, and Madagascar. The dominant group among Maroon communities was from the Gold Coast. In Jamaica, this group was referred to as Coromantie or Koromantee. They were fierce and ferocious fighters with a preference for resistance, survival, and above all freedom and refused to become slaves. Between 1655 until the 1830’s they led most of the slave rebellions in Jamaica.

Spiritual life was of the utmost importance to the Maroons which was incorporated into every aspect of life, from child-rearing to military strategies. Almost every slave rebellion involved African spiritual practices. Leaders, such as Queen Nanny, usually practiced Obeyah and were able to instill confidence in their followers. Spiritual practices such as Obeyah evolved from Africa, and during slavery, they were of great significance to the black population. However, under colonial rule as Western culture was imposed on the Caribbean, these African practices became ‘outlawed’ and took on negative connotations.

Among Maroon culture, their ancestors are revered and their importance to everyday life is recognized. The past is a source of pride that is both taught and shared. Amongst modern day Maroons, the history of their resistance against slavery is an extreme form of pride that forms a large part of Maroon identity. The story of the Maroons’ endurance and ability to hold off the British troops for almost eighty years is one that has never been repeated in history. What saw the Maroons through to freedom were their unfailing courage and determination. Their resistance to slavery drew on the strength of their memory of Africa and its culture. Their African culture and identity instilled in them great confidence and self-esteem. So much so that this diluted the stigma of inferiority imposed by the plantocracy. Therefore, the resistance against slavery by the Maroons was a defense of their culture and identity, their spiritual and political values, and the preservation of African civilization. Therefore, Maroon ancestors are an integral part of their day to day lives. At each annual Maroon celebration of the 1739 Peace Treaties, there is a ‘private’ element of the festivities at which only Maroons may attend, where the ancestors are said to visit, including Queen Nanny who is honored.

The Significance of Women Maroons

On the plantations, women did not escape the brutality of slavery. Marriage and partnerships among slaves were prohibited. For those that managed to form unions in secret, they were forced to endure the removal of their offspring who were separated from their mothers soon after birth and sold into slavery. Many women opted for abortions rather than see their babies endure the same fate (slavery) that had befallen them. Furthermore, women on the plantations were physically exploited by their slave masters by rape and other sexual practices that were often quite sadistic. They, too, endured hard physical labor within the household doing domestic work and rearing the children of their slave masters. Some occasionally worked on the plantation itself.

By contrast, the Maroon women raised crops and were responsible for most of the agricultural output within their communities. The men hunted wild hogs and raided the plantations for food and supplies and to free slaves. Often, the plantations were ‘raided’ to bring back women into the Maroon communities, without which they would be unable to increase their numbers and ensure the survival of the Maroons as a race. There are legends of great women Maroon warriors who raided the plantations and freed slaves, wielding huge knives that they used to cut off the heads of the British. The strength of women in Maroon communities stemmed from their position within traditional Ashanti or Akan culture. The Ashanti culture was based on a tradition of warrior nations and history of proud and respected women. Many Ashanti elements were retained in the Maroon language and culture.

The Legend of Queen Nanny

Queen Nanny is credited with being the military leader of the Windward Maroons who employed clever strategies that led to their repeated success in battles with the British. She was a master of guerilla warfare and trained Maroon troops in the art of camouflage. Oral history recounts that Nanny herself would cover her soldiers with branches and leaves, instructing them to stand as still as possible so that they would resemble trees. As the British soldiers approached completely unaware that they were surrounded they would swiftly be picked off by the Maroons.

Maroon settlements were situated high up in the mountains with only a narrow path leading to their town. In this way, the British soldiers could clearly be seen on approach as they advanced in single file, allowing them to be picked off one by one. This method was particularly successful with large numbers of British soldiers being killed by a comparatively small number of Maroons.

A famous legend about Queen Nanny is that during 1737 at the height of the Maroon resistance against the British, Nanny and her people were near starvation, and she was on the brink of surrender, when she heard voices from her ancestors telling her not to give up. When she awoke, she found pumpkin seeds in her pocket which she planted on the hillside. Within a week the seeds grew into large plants laden with pumpkins that provided much needed food for the starving community. To this day, one of the hills near Nanny Town is known as ‘Pumpkin Hill.’

There are two versions of the story of Nanny catching bullets. The first is that Queen Nanny was able to catch bullets with her hands, which was a highly developed art form in some parts of Africa. The other story is that Nanny was able to catch bullets with her buttocks and fart them out again. Renowned historian Edward Braithwaite suggests that the original story took a vulgar twist on account of British colonialists who were known to detest Nanny and were being deliberately offensive about her when they relayed this tale.

The last legend about Queen Nanny is that she placed a large cauldron on the corner of a narrow mountain path near the edge. The pot was said to be boiling even though there was no fire beneath it. British soldiers approaching would curiously look inside, fall in, and die. Some were said to collapse and fall over the hill. There have been suggestions that the pot contained special herbs with anesthetic properties, as Nanny was said to be an herbalist. Contemporary historians maintain that the pot was in fact a circular basin formed by the hollowed-out rocks of the Nanny River, joined by the waters of the Stony River. The continuously flowing river kept the water constantly frothy, giving it the appearance of a boiling pot.

The Legacy of Queen Nanny

Queen Nanny is credited with being the single figure who united the Maroons across Jamaica and played a major role in the preservation of African culture and knowledge. She was hated by the British. Early historians wrote in derogatory terms about the Maroons, trying to present them as savages no better than animals. Queen Nanny was often portrayed as being bloodthirsty. Thickness’ journal published in 1788 described an encounter with a woman presumed to have been Nanny herself, wearing bracelets and anklets made from the teeth of British soldiers. “The old hag had a girdle round her waist with nine or ten different knives hanging in sheaths to it, many of which I have no doubt have been plunged in human flesh and blood.”

Much of the work compiled by Edward Braithwaite was instrumental in seeing Queen Nanny made a National Hero of Jamaica in 1976. This brought about a national recognition of the contribution made by the Maroons in securing liberty from slavery from the British.

The Windward Maroons with Queen Nanny as their leader is role models for resistance, rebellion, and survival. Queen Nanny herself is a symbolic figure for all those who suffer from oppression. Whilst Queen Elizabeth 1 dispatched the pirate John Hawkins on her own ship, the SS Jesus of Lubeck to Africa with orders to transport Africans to Jamaica, Nanny of the Windward Maroons was empowering her people to resist slavery at all costs. Therefore, Queen Nanny is the true Queen of Jamaica.

Much of black women’s herstory is buried in the wasteland where patriarchy, racism, and other oppressions intersect. As women reclaim spaces for themselves in the present, many of them feel an almost urgent pull to excavate these herstories. They do this to understand more about their journeys, while also celebrating all that they have been.

I am always reminded to begin with one woman that lived centuries ago, one who epitomizes the warrior woman spirit that I see in so many Caribbean women today: Queen Nanny.

“Queen Nanny was in a fight for her people’s lives, and the fight was not abstract.” 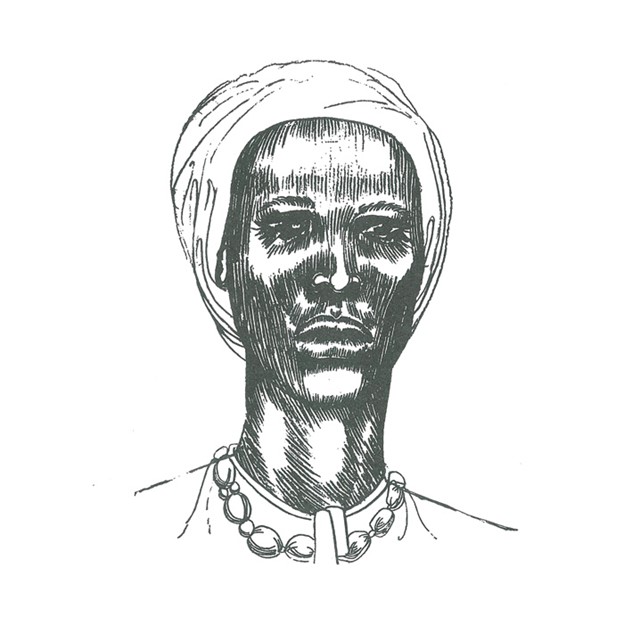 It is said that Queen Nanny was not only a warrior, but she was also a wise woman who encouraged her community to remember those customs and traditions that had traveled across the Atlantic in the bellies of slave ships. In that spirit, Queen Nanny: we remember you.

Gabriel, Deborah. “Queen Nanny of the Windward Maroons Has Largely Been Ignored by Historians Who Have Restricted Their Focus to Male Figures in Maroon History. Learn More about Jamaica Only Female National Hero.” Jamaicans.com, 8 Aug. 2004, jamaicans.com/queennanny/.